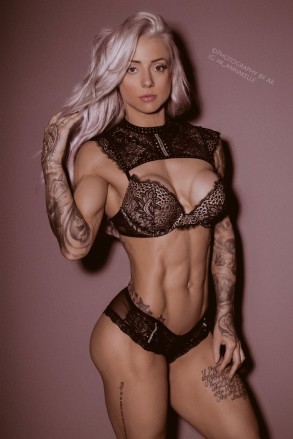 Lauren began her dance career in traditional ballet, performing for the first time in front of an audience at the age of two. As her ability grew so did her need to explore dance in other art forms.

At the age of fifteen Lauren took it upon herself to take Irish dance lessons with the Morgan School of Irish Dancing. This became her biggest passion and took her all over the UK to compete in competitions. After just a few years she was competing in the World Championships in Belfast and Scotland.

Lauren completed A Level Performing Arts and went on to Edge Hill University to do BA Hons Dance, Drama and Physical Theatre where she studied dance in all forms. This degree took her to Florida, USA where she was lucky enough to work at the Walt Disney World Resort.

Lauren has worked with Peter Kay and Robson Green in hit shows ‘Britain’s Got The Pop Factor’ and ‘Northern Lights.’

Her love for Pole Fitness began in 2009 and after just 8 months she won her first competition and was crowned ‘Pole Queen 2010.’ In more recently Lauren has placed both 3rd and 2nd in regonal competitions.

With Pole developed her love for Aerial Arts.

Lauren has taught her junior student Aimee Hilton from the start of her pole career, choreographing several rountins that have taken her to the top of her competing game. AImee is currently 3rd in the World.

With her love for fitness growing Lauren decided she'd like to compete in a bikini fitness competition and joined Showgirl Fitness, winning at all of her competitions! Lauren is now a WBFF PRO Bikini Fitness Athlete. She is also a level 3 qualified PT and Posing Coach

“I love that pole has given me a new passion for dance. It challenges me both mentally and physically. For people wanting to get fit the results that you see on your body are amazing! It really is for everyone young and old. I’ve met some of my best friends through pole fitness and look where we are today. The camaraderie in lessons is just unbelievable. Everyone is behind you every step of the way! Give pole fitness a chance, you’ll never look back!” Lauren x